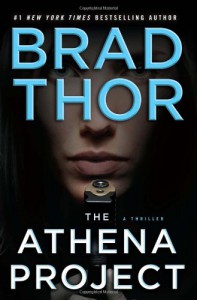 Oh for gawd's sake...Thor can't write strong women fershit. I wonder if his spouse belongs to the Junior League. (OK, OK, that was a low blow...rewind.)

I don't think critical thinking was a competency identified for any of Mr. Thor's courses/curricula/degree(s), if plural. I've heard of knee-jerk liberals (although I am w-a-y beyond that--I'm flaming) but I don't quite know how succinctly to label a reactionary sexist American-terrorist sonofabitch. (Ya see, that's not succinct) Clearly, though, I have a handle on the English language and detest split infinitives. :-)

And (yeah, I am not happy) what Brad Thor considers acceptable in terms of "American techniques of interrogation" is no different than what the Nazis did. Both are way beyond the pale.

I should have known when Scot Harvath was introduced as a (secondary) character. I thought I had given up on Brad Thor after "The Apostle." Then I thought I'd give him a chance with another potential series that focused on women. HA!!!.

Have I mentioned I LOVED Stargate/Stargate-SG-1? :-) It had some "good guys." Notably Richard Dean Anderson and the rest of the team. And yeah, I loved MacGyver too.
-----------------
Finished and I am skeptical that Brad Thor actually wrote this book. Little though I have increasingly disliked his politics, at least he was a more than competent writer. Not here.